There’s a building in my neighbourhood that’s been under construction since 2016, a 25-storey behemoth with a podium and three towers. It’s part of a precinct that’s in the process of flipping old industrial sites to high rise residential.

Noticing no evidence of construction progress at this particular site, I started taking photos of it semi-regularly, from the train platform nearby. Although it looked to have topped out there was a good 12 months where nothing at all had visibly changed.

I dub thee Sky Hulk, derelict in the sky. 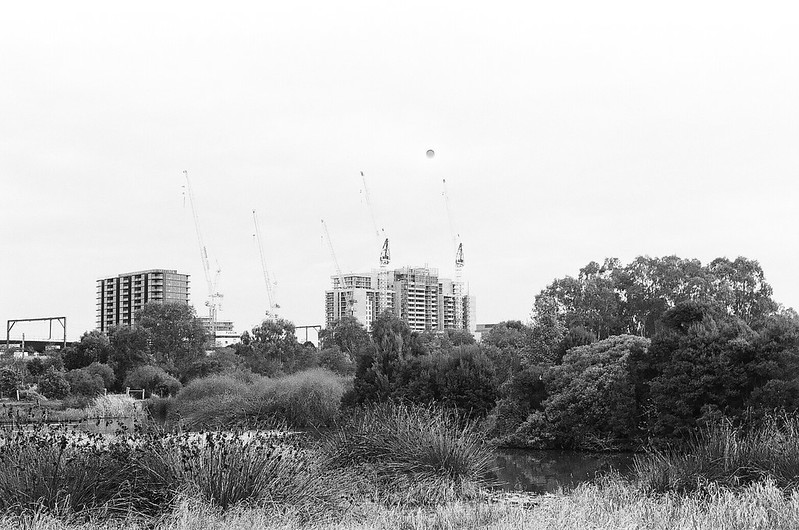 Before this, there had been stories in the local paper of incidents – concrete spraying onto cars driving past the site, unpaid subcontractors and the union getting grumpy, a theft of hundreds of thousands of dollars worth of tools. More recently, sales people had been seen hovering outside the market on Saturday mornings pushing one-bedroom apartments in the Hulk [tell them we’ve already got one – it’s very nice].

Suffice to say it has my attention. What if it never gets completed? Bad for everyone with a stake in it, and the neighbourhood gets to keep a wall of concrete with a half-finished facade. Plenty of substrate for spray paint and climbing weeds.

The other week I was taking a walk around the river using up my roll of film in preparation for a black and white developing workshop I was doing the next day. Around the same time I had been pondering this blog, and had settled on naming it after the name I had given that huge, unchanging construction site. I used up the last one-third of the film taking Sky Hulk photos.

A couple of days later I was driving past and noticed people on site, performing actual construction work. Good for them.

I was going to use Sky Hulk as a metaphor for something, but there’s really no metaphor.* It’s just a first post.

* The Clamp Center from Gremlins 2, on the other hand.